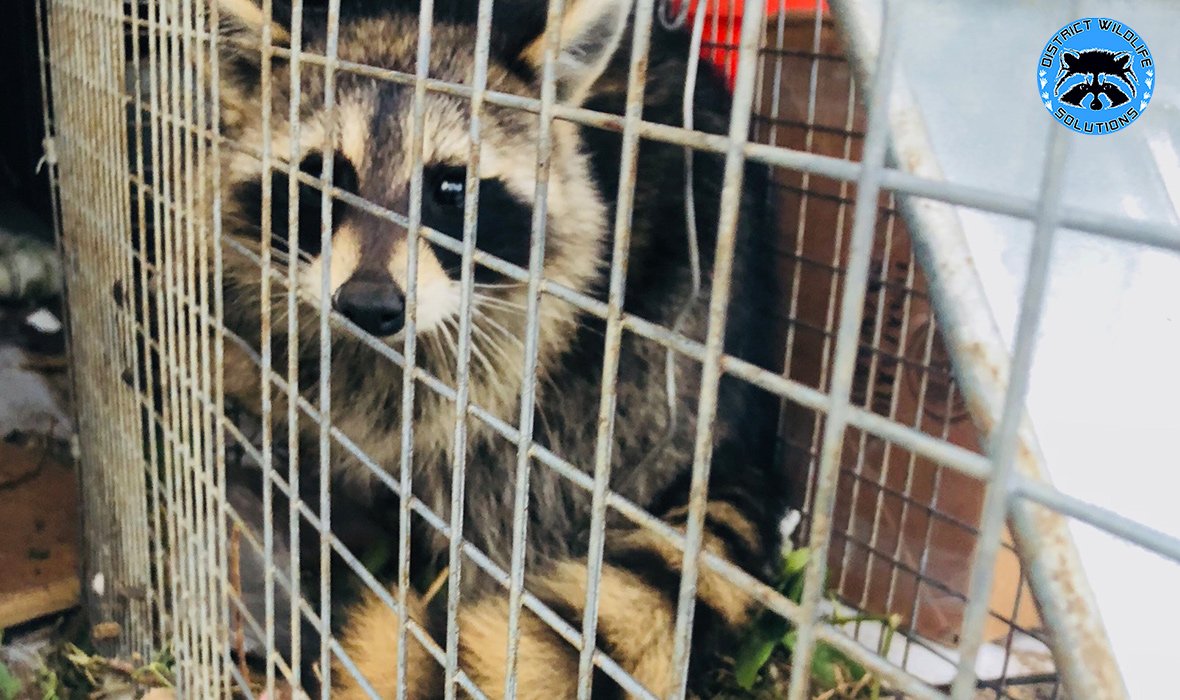 District Wildlife Solutions provides raccoon trapping and removal. We know everything about the raccoons of Maryland, and specialize in the safe, humane, and effective removal and prevention of raccoons from home and property. Raccoons require speciual trapping considerations, and we have the correct traps, tools, and experience to properly address the unique characteristics of raccoons. Call us now at 202-997-3410 for Washington DC area raccoon removal.

How to Keep Raccoons Away From Your Property

Raccoons are particularly smart and resourceful, but let’s face it, you don’t want them in your home; or near your home, for that matter. If you already have raccoons on your property, trapping and removal is the best way to fix the problem. But what about preventing the furry bandits from installing themselves in your attic or under your porch?

You don’t want raccoons destroying your plants, gnawing at your vegetables or fruits, knocking down your garbage cans or wrecking your bird feeder. To prevent these types of damages, first off, you need to make sure that the raccoon doesn’t have any entry points to your property. No raccoon access means shutting down any holes that they can get through. It’s best to seal the holes with 16-gauge nets with half-inch openings. The chimney is also a preferred raccoon point of entry, so it is advisable that you install a steel chimney cap in order to keep raccoons away.

These straightforward home repairs really do their job in keeping raccoons from nesting in your home, but another important prevention tool is eliminating the attraction itself. When raccoons are hungry, they’ll go for everything they can get.

These animals are instinctively attracted to underwater food, so if you have some sort of fish pond on your property, the raccoons will surely want to get all up in that business. If you want to prevent raccoons from getting to your fish, a good method would be to offer the fish a hiding space by placing a gauge steel net over the pond.

Properly installing fences is a good prevention method. But beware, raccoons are nimble and resilient, not to mention pretty smart. Make your fence tall enough (or roof it) and deep enough so that they can’t climb or dig their way in. Also, make sure that you don’t leave any tools laying around the fence; raccoons are dexterous and known to often use manmade tools in order to facilitate their access to food. Getting rid of fallen fruits and nuts is also helpful in preventing raccoons from being interested in your property. Equally helpful, if you feed other animals outside, make sure you don’t leave pet food out during the night or even during the day. If any food is left after the pets are done eating, put it back inside until the next mealtime.

It’s pretty hard to prevent raccoons from invading your property – if they’ve got their mind set on it, they’ll probably find a way of getting in. Nonetheless, opposite to various so-called raccoon repellants or noise machines that actually don’t work, these are pretty good tips that will increase your chances of prevention. Keep in mind, even though the prevention prognosis doesn’t sound particularly promising, trapping and removal once the raccoon is already on the premises is nothing but plain sailing if you know what you’re doing.

Visit our Washington DC wildlife removal home page to learn more about us. 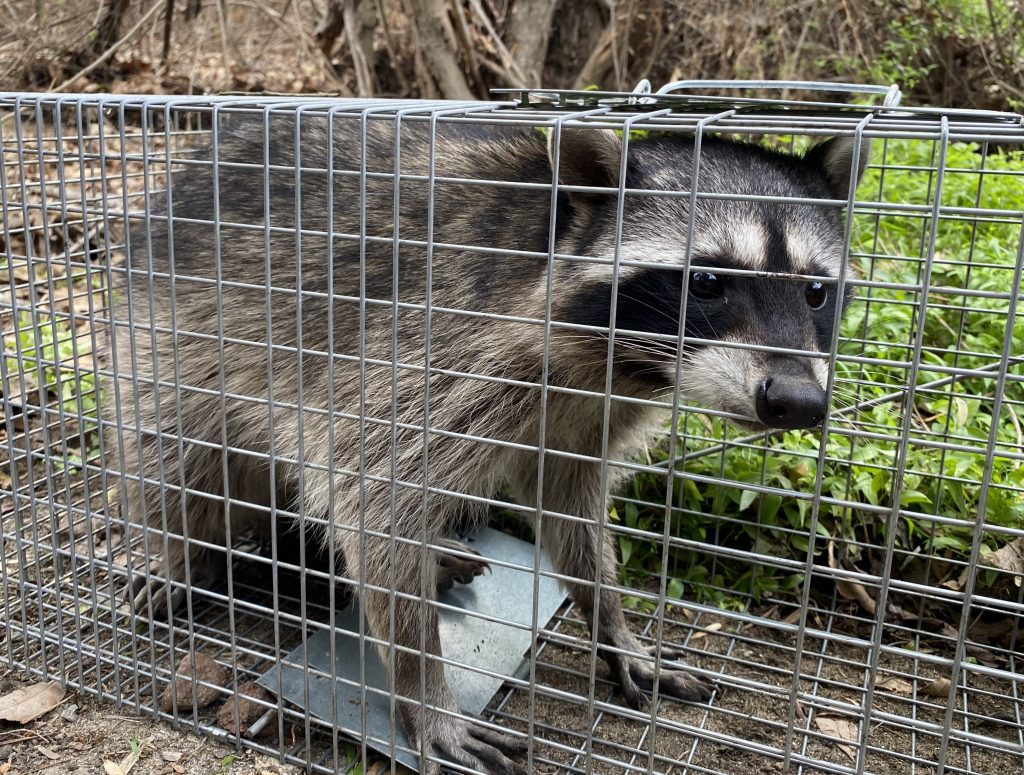 How to Keep Raccoons Out of The Attic

Are you worried there might be raccoons trolling around your property? You’re not alone. Raccoons are, in fact, one of the most common house intruders known to property owners in the United States. That’s why we’ve set out to offer you some solutions for even the most persistent raccoon problems. Visit animalatticpest.com to learn more about raccoons in the attic.

Figure out their entry point.

Obviously, whenever an animal forces its way into your house, it must do so through some entry point. Maybe it’s a hole in the wall, a loose vent, or a cracked roof. Whichever it is, your first task is to identify it and seal it ASAP.

Why is it important to seal the raccoon’s entry point? Because if you don’t, more animals will just keep coming through. This is also why you should use sturdy material when sealing a crack or foal. Expanding foam works well, particularly for large holes, as does wire mesh (with the unique advantage that wild animals aren’t able to chew or claw through it).

A great way to deter raccoons from bothering your home is to make persistent loud noises since these animals hate that. By nature, raccoons are dark, quiet, nocturnal sort of creatures, so loud noises (like banging pots, or even a special noise raccoon deterrent) can work wonders in keeping the animals away.

Naturally, this shouldn’t mean that you should live in the constant clamor, but rather that you pick your moments. Typically, the best time for scaring off raccoons is during the late evening, when the mother raccoon is just getting out and about.

… so do bright lights.

Another common trick for keeping raccoons away is to just turn on the light. Once again, as nocturnal creatures, raccoons tend to have an intense dislike for strong light, so they’ll likely just scamper off when exposed to it.

Keeping the lights on in your attic might also turn out to be a solid way to deter raccoons from nesting there in the first place. To successfully “win” against racoons, you must first understand their thinking. Keep in mind that raccoons are just looking for a comfy shelter and a place where they’re unlikely to be found out and harassed. So if you keep the lights on, they may well assume there are people living in the attic, and so won’t bother.

Coming back to those unhelpful entry points, how’s your chimney looking? If you’re sporting a nice, open chimney, that might well be just what’s attracting raccoons to your home, in the first place, as it allows them easy access.

Maintaining an open chimney is not only a mistake in terms of wildlife but also a serious fire hazard, as the various items and creatures that tumble down your chimney can prove to be ideal kindling.

So for everyone’s safety, installing a chimney cap is a great way to prevent raccoons from bothering you.

Another important trick to keep in mind when deterring raccoons from your property is that sealing your trash cans can really make your property less appealing to them. At the end of the day, raccoons are just looking for some grub, and if you deny it to them, they may just pack up and leave.

Put up a fence.

This is another excellent prevention mechanism to keep raccoons (as well as other nuisance wildlife) off your property. However, when raccoon-proofing the property, make sure you dig the fence well into the earth, since raccoons are notoriously skillful diggers, as well. 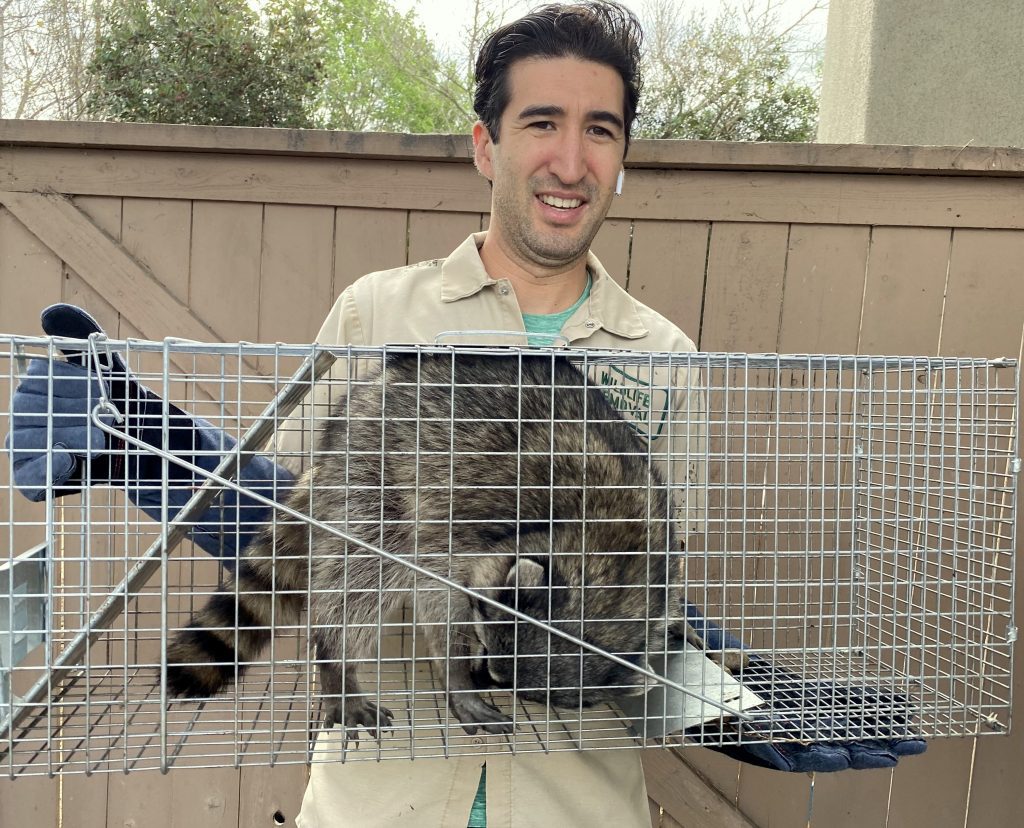 How to Remove Raccoons Under Shed

So maybe you’ve seen a raccoon or two around your property, and now you’re starting to freak out. It’s not at all uncommon, and it’s smart to worry, since, after all, raccoon damage in all types of serious, and should be avoided at all costs.

A popular hangout for raccoons, aside from the obvious home attic, is underneath the shed or deck of your home. This, in many ways, is the ideal hidey-hole for nuisance wildlife, raccoons in particular, for a variety of reasons:

So what can you do if you’ve got raccoons living under your shed?

Of course, the best option here would be to call a professional wildlife removal team, as they are up to date on all the dos and don’ts of raccoon removal. They will be able to handle the issue quickly and professionally, with minimal damage to your property. And no doubt, that’s what we’re all aiming for here. To learn more about how to get rid of racoons under shed at raccoonpest.com.

But in case you choose to go a different route, here are some of your options:

First, it’s important to understand the way your unwanted visitor’s function. While most raccoons are solitary, the ones nesting underneath your shed or deck are probably a mother raccoon with her babies. Mother raccoons usually give birth during spring and then nest for a period of a few months. That’s to say that baby raccoons are largely independent by the end of summer and will disperse on their own.

So depending on the time of year you’ve discovered this invasion, waiting it out might be a sensible choice for you.

If you’ve decided to evict the raccoon(s) faster than that, you can try making the area underneath your shed as unlikable as possible, and that means going straight to what raccoons like least.

As nocturnal creatures, raccoons have an intense dislike of bright lights, so keeping on the lights, or even installing a light motion-activated deterrent can work wonders in forcing the raccoons to leave.

Similarly, using a device that sprinkles water or emits an unpleasant sound could also work well in encouraging the raccoons to leave. The way this works is that it convinces the animal that your property is undesirable, without actually harming it, and that’s one of the most humane alternatives you can opt for.

When dealing with nuisance wildlife, we want to figure out what’s attracting them to our property and fast. The sooner we remove the main attraction point, the less likely the raccoons are to stick around.

A big attraction for raccoons is the open trash can. Since raccoons are opportunistic eaters, they will eat any sort of leftover or edible in your garbage. This is why it’s smart to opt for sealable trash cans that can’t be opened by toppling since they’re also quite likely to try that.

If you’re pretty sure it’s not the trash cans, look for other possible attractions, such as pet food or water left outside overnight, fallen fruit, vegetables in your garden, a fish pond, bird feeders, or even small mammals.

Raccoons will eat anything that crosses their path (and that they can safely put down), so be on the lookout for anything that they might consider edible or drinkable, and get rid of it.